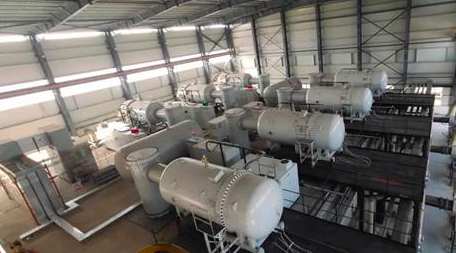 Posted at 10:26h in Uncategorized by admin

The facility is located at the Guanhua Knitting Factory in Jiangmen city, Guangdong Province South China. It was constructed by CGN Dasheng Accelerator Technology. With 7 electron accelerators working together the facility has a treatment capacity of more than 30,000 tons of wastewater per day making it the largest industrial wastewater treatment project using EB technology in the world. The new facility has established a new benchmark for the treatment of industrial wastewater in China and worldwide.

Data from a six-month operational trial showed that the chemical oxygen demand (COD) of the wastewater dropped from 200 mg/L to less than 50 mg/L, and the chromaticity dropped from 80-100 times to 10 times. The quality of the treated effluent meets national and regional standards on discharges. 70% of the treated wastewater is reused in the factory. It is estimated that the project will save 4.5 million tons of water annually. Moreover, the service life of the back-end industrial RO membrane (industrial reverse osmosis membrane) has been increased over 50%, with the biodegradability of the membrane rejected water improved. The project will help to save the factory at least 10 million yuan per year.

CGN Dasheng established the first demonstration industrial wastewater treatment project using EB technology in Zhejiang Province east China in 2017. Based on the experience gained a number of innovative technology and process upgrades have been implemented. By 2020, with more than 30 invention patents in use, the power of the electron accelerator is greater, the capacity of wastewater treatment is improved, and the effectiveness of treated effluent is more significant. Evidence reveals that treatment of industrial wastewater with EB technology is proven and can be applied for large scale industrial use worldwide. The technology especially valuable for the advanced treatment of refractory wastewater and wastewater from various industries, such as printing and dyeing, papermaking, chemicals, pharmaceuticals, and industrial parks.

The application of EB technology in the treatment of industrial wastewater has been jointly developed by CGNNT and The Institute of Nuclear and New Energy Technology, Tsinghua University (“Tsinghua INET”). Both parties contributed to the research and have established intellectual property rights including core equipment and process. Meanwhile, the first international technical standard on industrial wastewater treatment by EB technology has been established. This represented a major breakthrough in the field of environmental pollution control worldwide.

CGNNT and Tsinghua INET are extending the application of EB technology to other fields, such as the management of antibiotic bacterial residues, disinfection and sterilization of hospital wastewater, preservation of agricultural products, treatment of medical waste, treatment of landfill leachate, treatment of pharmaceutical wastewater. A number of demonstration projects under construction in different parts of China. International cooperation is also being achieved with partners in South Korea, France, India, Pakistan Thailand, Indonesia. 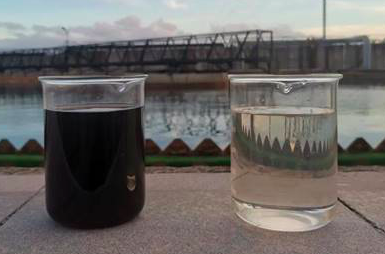 Wastewater before and after treatment

The International Atomic Energy Agency (IAEA) plays an important role in the application of EB technology for environmental conservation and regard the treatment of wastewater as one of the main potential applications for the peaceful use of atomic energy in the 21st century. In 2017, IAEA released the newsletter “China inaugurated its first facility that uses electron beams to treat industrial wastewater, ushering in a new era for radiation technology in the world’s leading textile producer.” (IAEA e-newsletter, 07 Mar 2017).